Getting Divorced but Living Together?

{3:54 minutes to read} When most people get divorced the last thing they want to do is continue living together in 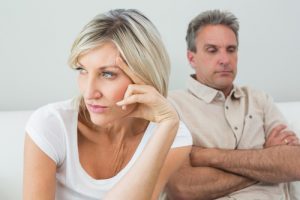 the same house. One of the prime reasons to get divorced is so you no longer have to live with that crackpot, jerk, cheat, ne’er-do-well, liar, energy-sucker.

When there are no kids, this is usually an easy decision. Hasta la vista, baby. But life isn’t always neat, and when there are children and limited resources, keeping the family home may be the best way to harness those resources and maintain stability.

The stars need to line up for this to work, and no arrangement is perfect. A multi-family house makes things easier, though if the couple has been renting out a separate part of the dwelling, taking that over will reduce income. But this can still be much cheaper than:

That is rarely cost effective. And children being able to remain in the family home can be an enormous benefit.

Money may not be able to buy happiness, but enough of it will buy you two homes, even two homes close to one another. So if money is not an issue, there is probably no reason to share a home after getting divorced.

If the divorcing couple will continue living in the same house, what needs to be worked out?

If the house was bought while the couple was married, they most likely own the property as tenants by the entirety, meaning:

However, divorce eliminates a tenancy by the entirety, so a divorcing couple who is not selling a property needs to decide what they want to do and ensure it happens. If they want to preserve the current ownership status, they can change the deed to indicate they own the property as joint tenants with a right of survivorship. In such instance, a surviving ex-spouse would automatically become the owner of the property when the other dies. A divorcing couple with young children may want that arrangement.

There’s more to cover here, in particular the ongoing relationship of a divorcing couple who share ownership of and continue to live in the same residential property, and the financial implications of such an arrangement. That will be the subject of the next blog.

There are two critical things to remember. The couple must:

Are you part of a divorced couple who remained living in the same house/building post-divorce? What worked? What didn’t? What might you now do differently?

Are you a mediator or attorney who has worked out such arrangements? Again, what worked and what didn’t? What pitfalls did you encounter and how were they resolved?