Anger as a Pathway to Resolution, Part I 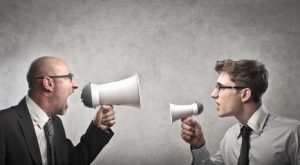 There are very few emotions as destructive as anger. Shootings, murders, rapes, spouse and child abuse, intra-family squabbles (big and small), road rage, divorce, gang violence, are all fueled in part by anger. Anger is usually an aspect of any litigation, although even mediators must acknowledge that litigation as a dispute resolution mechanism is light years ahead of violence.

Anger and violence go back a long way. Whether we take the Bible as historical truth or a fundamental mythos of our collective Western unconscious, the first act of violence is primeval: it occurs between the very first human offspring. Most of us think we know the story, but just in case, the entire events are described in only seven short verses, as follows (Genesis, 4:3-9):

In the course of time, Cain brought an offering to the Lord from the fruit of the soil;

and Abel, for his part, brought the choicest of the firstlings of his flock.

The Lord paid heed to Abel and his offering,

but to Cain and his offering he paid no heed.

Cain was much distressed and his face fell.

Well really now, who can blame the lad? On the surface at least, Cain did nothing wrong, and while there is much commentary about the insufficiency of Cain’s offering, he hasn’t given any guidance as to what he did wrong or how to correct it. Life is inevitably full of disappointments. How one handles them is key. As the story continues, God does give Cain some sage, if non-specific, advice:

And the Lord said to Cain, “Why are you distressed,

And why is your face fallen?

Surely, if you do right,

But if you do not do right

Sin couches at the door;

Its urge is toward you,

Yet you can be its master.”

So, do right, things turn out okay. Don’t do right, there could be problems. While the rest of us all know what not to do here, Cain apparently did not.

And Cain spoke to his brother Abel,

and it came to pass that and when they were in the field,

Cain rose up against his brother Abel and killed him.

The Lord said to Cain, “Where is your brother Abel?”

I have never done a mediation where anger wasn’t present and expressed. Commercial cases, employment cases, divorce cases, even personal injury cases, (except perhaps when only plaintiff’s counsel and an adjuster are present). It comes out in different ways, at different decibel levels, and with different words. The key for a mediator, however, is to take to heart the last words of advice to Cain, that “you can be its master.”  It may be unrealistic to expect the parties in a mediation, or even their attorneys, to be masters of the anger in the room. However, you as a mediator, can be controlling and using that anger – being its master – to open doors to resolving disputes.

Where have you been able to use anger in a positive way?  Or not…?